Home featured articles, IN EVIDENZA, News What is chessboxing-fit? 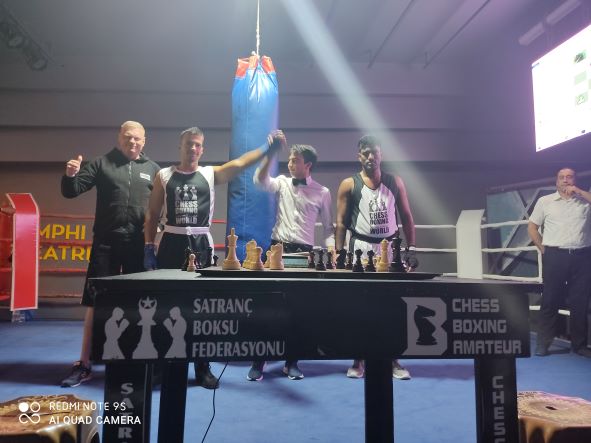 Chessboxing-fit does not envisage a real fight in the ring but it is a competition that involves punching a boxing bag and playing a blitz chessgame. It can also be fought via video-call or similar: both athletes could be in different places.

1. Matchesare made between two athletes. Tournaments can be made were several athletes compete in different matches, in ko format, or pools, with Swiss pairings, and other systems of grouping and pairings.

A chessboxing-fit match consists of two or, when needed, three rounds which are disputed as follow:

2. The duration of the matchboxing round(s) 1 minute;chess round 5 minutes;Timeouts 1 minute between one round and the other.
3. Equipment needed
at least one boxing bag for match, if two are used they should be of the same type;
for athletes: boxing gloves, boxing shorts, boxing jersey;
chessboard and pieces;
chessclock.
4. Rules of the boxing round(s)– blows on the boxing bag should be done with boxing technique, which the judge assesses;– the judge counts the strikes and applies the coefficient (1; 0.75; 0.5; or 0.25) depending on the boxing technique demonstrated by the participant;
– During rounds of boxing no one can touch the boxing bag, except for the very same athlete(s).
5. Rules of the chess round
As the chess round lasts only 5 minutes and both athletes have 3 minutes on their clock, the round of chess might terminate without a winner. In this case a third (boxing) round will be disputed.
6. Determination of the Winner:– Early win:the whole fight is won by the fighter who wins in the chess round by checkmating the opponent, or when is opponent loses on time or when one withdraws from the fight.
One can loose in chess also for illegal moves: at the third illegal move (by the same player) the game and match is finished.

– Winning on points:the total number of strikes counted by the referee(s), in rounds 1 and 3, are multiplied by the coefficients awarded to each fighter. The athlete with the highest points wins.
Coefficients awarded to each athletes can be different in round 1 and 3; when possible the judges swap over judging a different fighter in the boxing rounds.If the final score is equal it is a draw. If a winner is needed – because of a tournament format or because there is a title at stake – the athlete with the black pieces is declared the winner.
7. Age and sex categories:
As there is no phisical contact, participants of different ages and sex can compete together; final standings divided in categories can be drawn up at the end of the tournament.
The age and sex categories are the following:Children (male, female) below age 10;

Cadets (male, female) 10-13;Juniors (male, female) 14-17;Adults (men, women) 18-49;Veterans (men, women) 50+.
8.The RS coefficient
The RS (Rapid & Smart) coefficient is used to balance the number of strikes with the technical and tactical boxing component of chessbox-fit.The judge(s) decides on the “RS” coefficient for what one athlete has shown. The RS is then multiplied by the number of blows inflicted on the bag in the round.When selecting the “RS” coefficient, four technical components are taken into account:
The first Chessboxing-fit World Championships were held in 2022:
Chessboxing World Championships: India first, Turkey and Russia on podium.
Marco Muccini è il primo Campione del Mondo di chessboxing-fit. 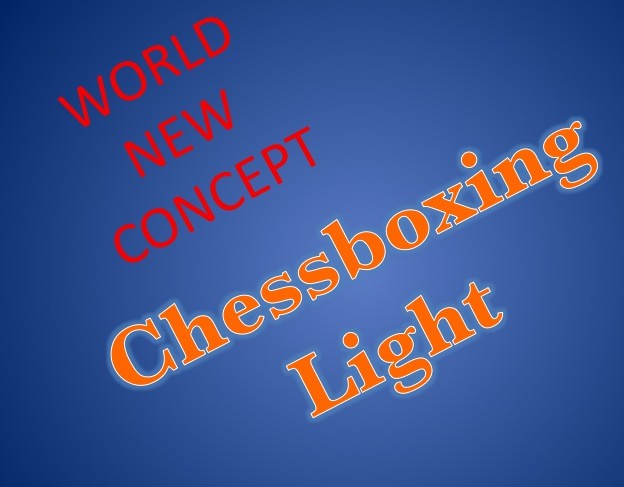 If you want to read instead about chessboxing light: